The Beginning of Marlborough Mustangs

My husband and I are the founding partners of Marlborough Mustangs, a farm dedicated to preserving the Canadian Suffield Mustang after they were forcibly removed from their home on the  Canadian Forces Base Suffield  after they were deemed to be destroying the natural Prairie Habitat.

I have a Honours Bachelor of Science in Agriculture from the University Of Guelph. This four year Animal Science honours program encompassed advanced courses in areas such as genetics, nutrition and animal behaviour. Following the completion of my BSc I pursued a career in Veterinary Medicine furthering my interest in  breeding a healthy, hardy horse with natural athletic abilities, a willing disposition and  a quick mind.  So I set out to find a breed of horse that would meet this criteria.

​
My husband Larry obtained a Honours Bachelor of Arts Degree in geography from Carleton University in the ’80’s. After finishing his first degree Larry’s strong interest in environmental issues and farming led him to Western Canada where he obtained a Masters Degree in Natural Resource Management from the University of Manitoba. Since graduation Larry has worked as an environmental consultant, horse and beef  cattle producer, and cash cropper.  Presently Larry divides his time between farm and his role as Practice Manager at the Campbell Road Veterinary Services, a veterinary clinic  located on our farm.

While on a business trip out west, we were introduced to the Canadian Suffield Mustang, a group of horses that had been removed from the Canadian Forces Base Suffield. I was especially  impressed by a  wild range stud named “Widowmaker”. He had the physical traits that I found appealing and his offspring  demonstrated the personality and physical athleticism that we were searching for. We became intrigued with the idea of preserving and developing this new breed. A few years later, we brought Widowmaker, along with four pregnant Mustang mares from Alberta 3500 Km to Smiths Falls, Ontario to be the foundation stock for Marlborough Mustangs.  Over the years, we have continued to add  new bloodlines, enhancing the  genetic diversity of the herd.

Today, Marlborough Mustangs is home to a small, yet genetically diverse herd of Canadian Suffield Mustangs. Through careful selection  we are proud to say that we are producing extremely athletic, hardy, intelligent, highly trainable horse with a strong desire to please. The result are horses that are a joy to work with!  Very aware how small the gene pool this breed currently we have continued to search for more bloodlines, and are developing associations with Suffield Mustangs breeders worldwide.

Over the years, our human family expanded to include two beautiful daughters who are also proud Canadian Suffield Mustang owners. Even before the girls outgrew their ponies they were riding Mustangs. Our oldest daughter, Morghan started riding Dreamcatcher, our pinto stallion when she was  just 9 years old. Our younger daughter Teaghan quickly decided that ponies were great for Pony Club but Mustangs would be her breed of horse.

We are constantly on the lookout for people interested in promoting this wonderful breed and have developed a program to encourage riders to partner with one of our Mustangs. We want all Canadians to know the  amazing horse that Mother Nature molded over 60 years wild on the rugged Canadian Prairies.

​​Producing a Marlborough Mustang
Genetics
​We have collected a variety of bloodlines to increase the genetic  diversity of the Suffield Mustang. We are constantly searching for more bloodlines and hope to develop a semen bank from as many stallions as possible. The bloodlines are the roots to develop and maintain this historic breed. But more than genetics formed this breed. Nature was harsh, long cold winters with little food and poor shelter from the elements, followed by short, hot, dry summers where food could be plentiful or almost non-existent. Mares nursed their foals throughout their next pregnancy as many foals perished during their first winter. Hence foals with mothers than could continue to provide them with some nourishment had a much higher chance of survival. This naturally selected for tough, hardy mares who could produce milk while pregnant and still have a healthy foal the following year. Foals grew very quickly in their first few months and then their growth and maturity slowed taking upwards of  seven years to reach full size. Fillies often did not cycle until much later than domesticated horses thus increasing their chance of surviving until they were physically able to start the long reproductive years. Stallions ran in large bachelor herds, with the majority never gaining their own mares. Only the best stallions held their mares for long. Even with such tough lives, the Suffields flourished and improved with every generation. These Mustangs were enclosed on an active military base and experienced live fire and quickly learned how to get behind the guns or seek shelter behind old concrete walls. As well as  becoming physically  tougher and hardier with strong bones and hooves and  strong herd instincts, they became naturally level headed, intelligent and sensible. Thinking was as an important survival trait as being physically hardy.

We believe that the production of a great horse goes beyond the selection of  the parents. To us, that is just the start, how they are raised and handled are just as important.

Our breeding goals are to produce Mustangs  that:

We are very careful when selecting breeding mares, however, our stallions are held to even higher standards especially when it comes to personality. Any stallion that does not meet our standards, shows any aggression or is difficult to manage is not used for breeding.

Raising our Mustangs
To encourage proper development our Mustangs are raised, in herds, on 200 + acres of rocky bush mixed with open pastures. The horses spend all year on pasture taking shelter in the bush or run-in shelters. This life style fosters the development of calm, sensible, sensitive, physically tough horses with strong bones and muscles and are surefooted and  possess  natural athleticism and endurance.

Scientific research has shown horses raised on pasture are healthier, more social, and have stronger bones and muscles than horses which are stalled on a regular basis.

Foals are raised in the herds with their dams, along with their older siblings, and the stallions. Foals are handled regularly, halter trained and manners taught while they are still nursing. Youngsters that are remaining with us are left in the herd for  2-3 years developing the herd instincts and running on the pastures developing natural balance, strong bones, and social skills. When they start training they are housed in stalls or in small paddocks to help them develop a new focus as they enter the next phase of their lives. After 1 month of training the majority are returned to herd living and brought out of the herd for work and sent back to the pasture. This helps keep  mental stress to a minimum and keep their bodies moving all the time. After all wild horses were designed to walk and eat constantly.

Prospective stud colts are  kept with other stud colts, older stallions and often with pregnant mares. This herd situation fosters excellent communication skills between horses and increases trainability. It also makes stallion management much easier and the stallions do not have to be constantly stalled or kept in isolation. When a stallion is needed for work they are simply removed from their mares and returned after their work is done. When stalled our stallions can be side by side without any issues and  we often use our stallions to babysit younger Mustangs and we often see stallions actively playing with the foals.

Of course, our horses are handled on a regular basis for routine de-worming, farrier work and veterinary care. We also ensure that our Mustangs are comfortable in stalls  and trailers so that they will have no problems when they are sent to trainers or stalled during shows or are travelling in horse trailers.

When our horses are young we take care to expose them to as many things as possible– horse trailers, obstacle courses, tarps,  music,  flags, umbrellas, blankets, hats, other livestock, different vehicles (4 wheelers, tractors, trucks, trailers) walking thorough water  and different footings to help prepare them for training and roadwork.

When they are 2  to 2 1/2 years old round pen work is usually started and tack is introduced. Once they are comfortable with round pen work they are turned back out with the herds to mature more. Typically, they are not started under saddle until they are 3 to 4 years old. Our Mustangs are never worked hard until they are 5 years old. They learn quickly and on average, it takes 30 days to take one of our Mustangs from halter to under saddle with walk, trot, canter and gallop. They are out on the trials and road as soon as the trainer decides they are ready, with some out on the roads in under 2 weeks of being started under saddle. After that almost all their training is done on fields, roads and trails.

We have started young Mustangs and older, older, off the range (aka wild) Mustangs and the training periods is very similar.  Our Mustangs are eager to learn and retain their training well. There is very little “review” work.

We have found that confused Mustangs tend to simply stand still and turn and look at  the rider or trainer.  There have been many instances where I am shaking my head,  blown away that  I “missed” their cues that there was a problem– whether is was with uncomfortable tack or a rider giving them conflicting requests. Luckily, the Mustangs are a forgiving breed and are always willing to give us another chance to “get it right”.

The Suffield Mustang has been slow to gain recognition simply because as an emerging breed  there only a few  Mustangs  compared to the massive numbers of older, more established horse breeds.

We are always surprised to see how uncomfortable people are to even consider something “different”.  We invite you to step out of your comfort zone and  take a serious look at our Suffield Mustangs. Perhaps your dream horse is a Marlborough Mustang. 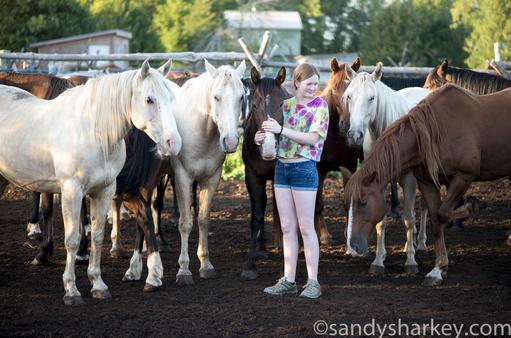